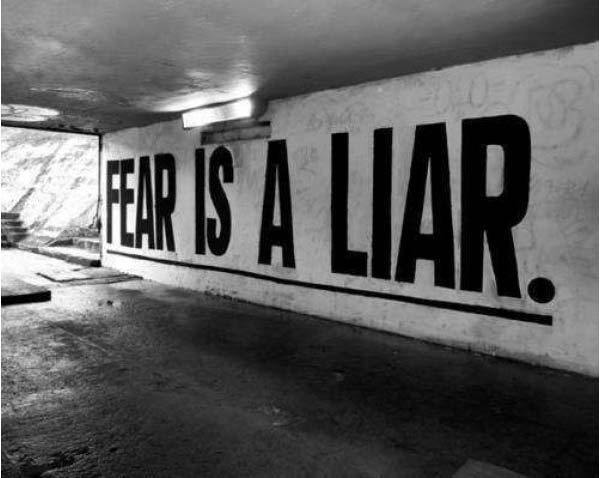 Fear in the World Today

There’s so much of it. This post has nothing to do with my books, my writing, me as an author or any such thing. This is my own personal view of how much Fear in the World Today there is. Well, perhaps it does have some relation to my book ‘Mr 303‘, but we digress.

Let’s talk about Government propaganda, ISIS/ISIL whatever you want to call them, terrorist groups and other fear mongers who want to do exactly that, spread Fear in the World Today. Their main tool is fear. Don’t worry about nuclear bombs, biological weapons, world war 3 or some other apocalyptic event which might destroy our current world. The biggest threat we face is fear. Once fear enters our worldview, we succumb to it, we start giving it more attention and they win.

Fear specialists, such as terrorist groups, rely on your fear in order to push you in a certain direction, perhaps towards a certain action. It’s done so well and so subtly, that you don’t even realise that you’re being manipulated most of the time. The event happens and suddenly you’re left wondering what to do, in a timely fashion, a suggestion comes along that pushes in you a certain direction. Had that event not happened, you probably wouldn’t have even considered this action.

There are plenty of conspiracy theories out there which purport this very thing is happening on large-scale populations. One more recent one I read which was quite interesting was the 9/11 conspiracy. The conspiracy goes along the lines of… that the 9/11 event was an inside job. The powers that be needed an excuse to push in a certain direction. They knew that the public would never support them so they created the events of 9/11 and then provided a solution. “Let’s go to war,” they said.Build fear, hatred and anger and gain support. It’s an old recipe and one that I really do hope was not the case with 9/11.

My issue is with fear itself. I don’t believe fear is a good thing. Fear is negative and causes negative actions. What I feel we need more of is positive thoughts and respect, compassion and even… dare I say it…. love.

I wrote a book about the apocalypse, because I was inspired by how many people truly believe there is one coming. The book I wrote is called Mr 303 and I’m almost finished editing. The story follows a central character called Bella who lives a rather ordinary life but quickly falls in love with Mr 303. Then the proverbial shit hits the fan and the world goes to shit and before you know it, she’s on the run with Mr 303, who turns out to be the strength she desperately needed. I like the book and it was very different to Monique; a book about a North London prostitute.

As I wrote Mr 303 and performed the relevant research, I discovered that there are a ton of theories out there and most of them center on… FEAR.

What we need to do is stop being led and start questioning everything. Without getting political or talking about things I know too little about, I’d just like to point out that fear is never a good thing. There is too much Fear in the World Today and we need more compassion, understanding, intelligence and…ahem, love.

*Photo ‘Fear is a Liar’ compliments of Linked 2 Leadership.