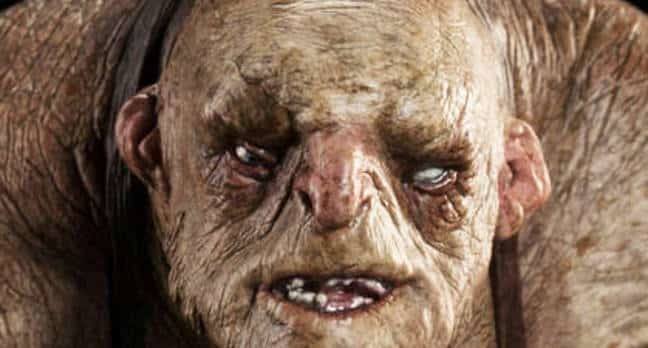 It is so easy to tell someone that they are a piece of shit human being when you are hiding your own ugly, puss-filled face behind a keyboard. You’re completely anonymous – so therefore, it is your God given right to slam anyone that you want, anytime, anywhere, any way you fucking want. There are no repercussions and no accountabilities for your actions because on the web, you are anonymous. Such is the way of Trolls on Forums.

My willingness to interact with such internet Trolls on Forums and other shady characters is dwindling by the day – and this comes from someone who spent over two decades helping to build the internet to what it has become. And I don’t regret it, not one bit. What I do regret, is giving more than a second of my time to the countless trolls who trawl Reddit, Amazon, Google+, Yahoo and many other forums so they can show someone else, how much they loathe themselves, how despicable they can be and how quickly they can bring someone else down.

Trolls on Forums, give yourself a pat on that hairy, hunchback flesh of yours – I say flesh because you already know you don’t have a spine. Excellent work – you have succeeded in upsetting others. Now go and celebrate by decorating your favourite Fried Brain Sandwhich with some dead flies – flies which have been gathering dust on your window sill – which itself has been shuttered closed to prevent daylight from ever hitting your monitor and giving you a ghastly reflection of your putrid puss-filled face. Drain that last cheap beer – cheap because you haven’t been able to get a job in a very long time and have thus resorted to life online and have to watch your meagher pennies. Pennies which have been graciously provided by your government, who in turn were funded by those very people you go and bring down. The irony isn’t lost on you because you perpetuate a belief system that God must exist – yet has failed you – why on Earth would he make your life so miserable after all – and has absolutely nothing to do with the reality that you are in fact, a scum-bucket filled cunt who God turned his back on a very long fucking time ago.

Fear and discontentment are fertile breeding grounds for malicious thinking and troll-like behaviour.

Unleash your fury on innocent others. Do it! You will feel sooooo much better once you’ve brought down some innocent person. Don’t worry yourself about whether or not they have financial problems and are simply trying to put on a brave face, don’t consider for a second, whether someone close to them has died and they’re online reaching out for someone to talk to, do not for a split second even think that maybe, just maybe, that person feels even lower than you and is doing the best they can. Trolls unite! Bring them down, surely you have the power to make others feel sadder than you could possibly feel? Do it you spine-less under-arm hair. Trolls on Forums do not give up your cause. You are slowly succeeding in making others feel as miserable as you deserve to feel. 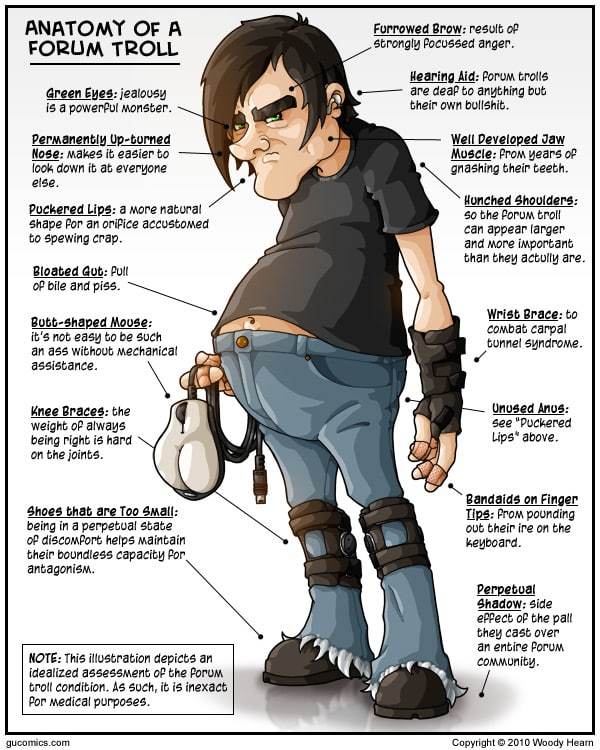 Thanks to Gucomics.com for letting me use this graphic.

For the rest of you, who are not Trolls in Forums, but have been victims of such crimes, I’d like you to save the above graphic to your PC; perhaps make it your desktop. Compliments of Gucomics who have also understood the very important work that Trolls in Forums are doing. Do not despair, use this image to remind yourself that you are not a Troll and therefore, do not deserve this behaviour.

As a former hacker and IT nerd, I have occasionally had the pleasure of tracking IP addresses of such Trolls on Forums and making note. Just in case one day, I decide to retaliate. Which I hope to never do. I must take my own advice and understand that these pathetic losers who make unnecessary negative comments online, are filled with their own hatred. If I attracted a troll, I must have done something decent. Trolls do not generally attack poor work. Trolls have respect for one another’s work and will only troll beauty.

If you’ve been trolled, rest assured that whatever you did was so amazing, so light-filled and magnificent, that it was like a beacon in the dark sewers where the trolls live.