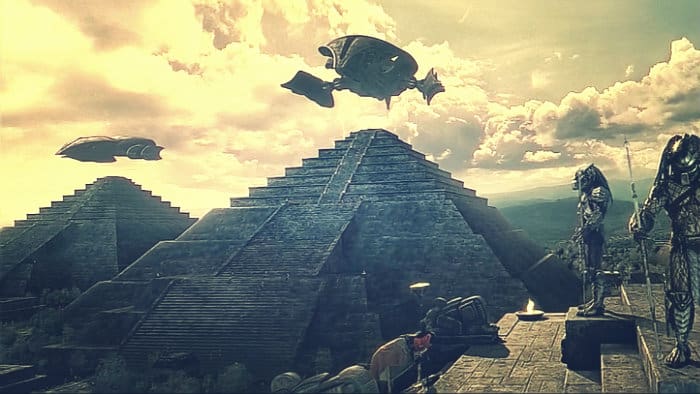 Somewhere on Uranus, a group of egg-headed, mustard-coloured, yellow aliens with eyes remarkably similar to a Pokemon’s are scheming the demise of the human race. The biggest obstacle to the alien agenda is our Goddamn fighting spirit – oh, we’re a pesky race, reknowned through the galaxy for being stubborn, stoic and most of all, our biggest threat is our compassion…yawn. It’s such a thorn in the side to these aliens who really just want us to roll over and play dead so they can just get on with…you know, just getting on and destroying our planet. Problem is, we’re doing a good job of it ourselves, so why should they come along and ruin the fun?

Maybe the aliens aren’t coming here to destroy our planet, maybe they’re here to destroy us and keep the planet for themselves, maybe just like in War of the Worlds, they’re going to transform the face of Earth to suit their own biological requirements.

Maybe the aliens aren’t even hostile; just indifferent. Ie, they don’t give a fuck about us at all. They’re potentially technologically advanced creatures who might come across us but really care unless we get in their way. In fact, we might mean no more to an alien species than an ant would mean to a human being. To some humans, the ants would be interesting to study, especially if it was the first time they’d come across that spcies of ant. An advanced alien species capable of interstellar travel isn’t going to go out of their way to exterminate a group of ants but if they did accidentally stumble upon our fragile species, would they care about stepping on us as much as most of us would care about accidentally stepping on an ant? I doubt it. Nor would they feel any remorse.

There are many, on this rather unique blue sphere that spins about 1,000 miles per hour and hurtles through space at 460 meters per second, who believe that there are in fact hundreds of thousands of different species visiting our Galaxy. I think most of these supposed aliens really don’t give a fuck about us any more than a car travelling at 80 miles per hour cares about the cyclist on the side of the highway.

They’re just passing through and concentrating on their own alien agenda, which may or may not impact on our little species.

The real hidden alien agenda that you’re curious enough to have gotten this far to know but not enough to be holding your breath for it is…there isn’t one.

Maybe Aliens do not give a fuck about human beings whatsoever at all.

There’s literally billions of habitable planets not just in our Galaxy, but within the Universe as we know it. Why would a species destroy ours? It’s going to be as foreign to them as Mars seems to us. We’re expecting aliens to look like us, to speak languages like we do and to breathe, eat and procreate like humans do, but what if they don’t? All of life on this planet is similiar because we share DNA. Thanks to those clever often bespectabled lab-coat wearing people in sterile environments around the world we’ve almost pin-pointed exactly how evolution came about. We know what animal led to the evolution of which animal and we’ve since understood the origins of man.

Most of the species of animals on this planet have legs; 2, 4, 6 or 8 of them, but they are legs. Aliens might not have legs at all. Perhaps aliens are more like snakes or snails, sea-life or maybe they have wheels.

For all we know, they might not even have a physical body. A physical body might be something that incredibly advanced alien species with inter-stellar space travel capabilities might have shed long ago.

In my book titled, “Circle in the Sand” I present one such scenario in which aliens…well, you’ll have to read it and see what that scenario is and let me know what you think.