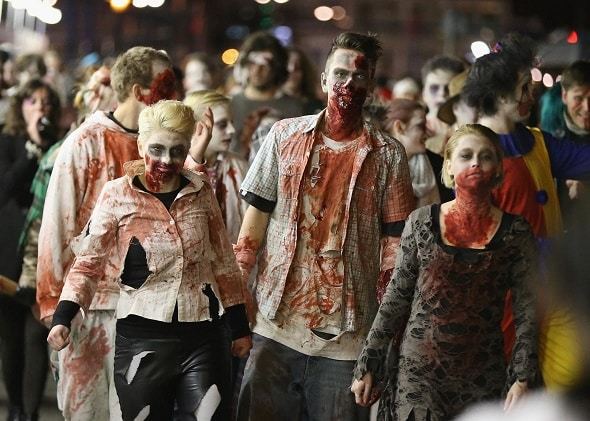 People Seem to be Getting Grumpier Part Three

If you missed Part One or Two, please read those first. Or this will make no sense.

Almost like a coordinated attack, the 4 somethings cornered me and I suddenly realized I was completely trapped. With a car blocking one direction and a man a few meters away on one side while a woman came at me from another direction, I had little choices. As the man lunged forward – surprising me with his agility, I reacted and jumped up, half twisting and turning around while suddenly a possible escape appeared. I almost felt the younger man, the one who could have been a former model, grab the back of my jacket as I lunged up onto the roof of the car. I spun and saw that if I timed this well, I could race across the bonnet of this car and jump onto the next and then the next. There were cars all along the street. If my intention was to go down the street, then I had a good chance to make it. But I had no idea what I would do then and I also did a double take at the somethings around me. I couldn’t think clearly enough or fast enough to determine what was the right course of action.

Was this some kind of joke? The thought did enter my mind.

It was no joke, teeth gnashed as growls came out of mouths that shouldn’t be growling. Eyes that were milky and clouded, no longer colored, looked up at me. The tidy woman and disheveled man reached the car and made as though to reach up and grab me. I suddenly realized I wasn’t safe, in seconds they would be able to grab my feet and trip me. Then what? I didn’t hang around to find out.

I cast a quick glance to my left towards the cafe, as though waiting for someone to mouth a warning or encouragement, but all I saw were a dozen faces equally as terrified as I was. With a quick leap, my feet dented the bonnet of the car as I jumped down and launched myself onto the next car. As I moved away from the immediate danger outside the cafe and leapfrogged across several cars, I risked a quick turn and saw I’d made some great distance from the somethings. Not enough, they were surprisingly fast. With little choice, I decided to risk a run around the block; a dim hope that I could outrun them and make it back to the cafe via the other direction.

As I ran around the corner, risking using the pavement instead of leaping onto the next car, I nearly collided with another group of somethings. There were about 20 of them, I didn’t stop and count. I immediately turned and raced back towards my origin, registering only major details before doing so. It was enough, they were similar, gnashing teeth and growling throats. Hungry? I didn’t want to find out.

My heart had taken on an uneven soundtrack of fast beats and the adrenaline sounded like waves crashing as I almost collided with the previous group’s fastest something; the model. He growled and lashed out and caught the sleeve of my jacket for the second time as I sidestepped him and tried to pull away. But he seemed very strong and perhaps coordinated because he used one arm to grab my sleeve and the other to try and reel me in. With quick thinking, I un-shouldered the jacket and let it slide off me. This caused the model something to lose his balance and he fell back into a something woman. The other two somethings from the first group were on the pavement coming towards me and I quickly saw my escape. I leapt over the nearest car and landed on the street; quickly turning and racing back the way I’d just come. This was my shot.

Without any thought for what I was going to do when I got there, I raced towards the cafe as fast as I could. My stamina was low and my excitement too high to be speedy, but it was enough. The somethings seemed to have been momentarily delayed as I ran to the front of the cafe. I quickly opened the door and burst in; scaring the crap out of all the women as I watched them all jump back in terror.

“Go!” was all I could scream, while I locked the door and ran towards the back of the cafe. I didn’t know where I was going, but I didn’t feel the glass of the cafe was going to hold back whatever it was that had chased me. Monique was beside me but lagged as I reached the entrance to the kitchen. I cast a quick glance at her pregnant belly, then towards the windows where I saw the model something suddenly appear and I grabbed her hand and pulled her forward roughly. As I rounded the doorway, I heard the cafe’s front door crash open and women towards the back of our group screamed. I rounded the corner and used the corner’s momentum to pull Monique around me and thrust her a little too hard towards the kitchen entrance. Luckily, she didn’t stumble and fall as I entered the kitchen right behind her.

Neither of us could have known how many staff worked in this cafe or who they were, but what we did suddenly know was that they were not the same people anymore. There was blood everywhere and bodies laying around the kitchen. Perhaps six people lay dead and covered in blood while a handful were bent over them. In the few seconds we had to take stock, we both realized what was going on. My stomach suddenly churned and I felt nausea just as a sound to my sharp right startled us both. I spun too late as a something lunged at me.

***The end of part three…You are in luck. Would you like to proceed to part four?***