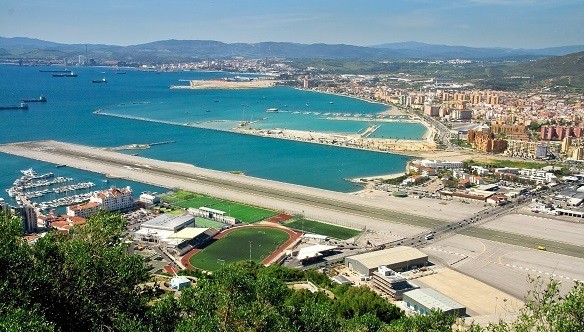 Yes, for about a year and a half, I was Living in Gibraltar. This was between 2002 to 2004. After I’d already spent a year and a half working in Jersey, Channel Islands. Back in the days when it was offshore and a tax free haven and the Royal Bank of Scotland International, liked to send me to lots of exotic locations. Probably more to get rid of me than any real need to have me there. But we digress. 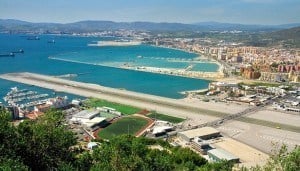 What a great experience; one that I will never forget.

Gibraltar is a peninsula – not an island – on the sunny-side of Spain. It’s adjacent to La Linea in Andalucia and accessible through immigration at the border.

The border controls back then – and even to this day, are a fucking nightmare. The Spaniards don’t want England to have control of Gibraltar; they want it back and they want it back desperately. Gibraltar is strategically placed in such a way that it controls entry into the Mediterranean and into Europe. Whoever controls Gibraltar, controls entry by sea into Europe. Hence you can see why the British are going to hang onto it. So now picture the Spanish immigration’s attitude as you try and enter and exit Gibraltar.

One Friday afternoon, being stuck at work at the bank while Living in Gibraltar, some friends and I decided to walk over the border, across the runway – yes, you walk across the runway – and go get some Tapas. 5pm, we arrive at the border and already notice that the queue of cars has backed right up to the airfield. That should have been our warning. We walk up to immigration and wait patiently in an already-long queue. An hour passes, we aren’t’ moving. Two hours. Three. By this point, we know what to expect. There’s no point trying to ask any questions because you know you won’t get an answer. We cancel the Tapas run and decide to go to Casemates Square instead. On Monday morning, we compare stories with our work colleagues and discover the border was pretty much closed all night. The Spaniards do this regularly to piss off Gibraltarians.

The joys of Living in Gibraltar.

Other than the political unfriendliness you encounter going in and out of Gibraltar, Gibraltar itself can be a fun place if you make friends.

There’s plenty of pubs, Irish pubs, British pubs and lots and lots of restaurants. With very little else to do, you’ll find yourself either drinking yourself to oblivion or getting really fat. I chose to run a marathon because I didn’t want to spend every night drinking and I didn’t fancy the idea of being fat. So I engaged a lovely personal trainer in Spain who met me on the other side of the border at 6am Monday to Friday. We ran for miles and miles as we trained me up so I could run the London Marathon. We trained for months during the week and on Friday nights, I’d train on seeing how many pints of beer I could drink before insulting one of my work colleagues and having awkward Monday morning apologies.

Within my first month, Living in Gibraltar grew pretty tiring. I’d luckily made friends at the bank I worked at and I’m still friends on FB to this day with some of them.

Giblish is the unofficial language of Gibraltar. It is a combination of Spanish and English, not too dissimilar to Spanglish – a pseudo combination encountered in North and South America among the English and Spanish speaking natives. Giblish is sort of based on Andalusian Spanish with some very noticeable differences. For instance, the Andalusians swallow their S’. So for example, me gusta, meaning – I like, is pronounced – me guta. Let me give you an example of Giblish. Yo voy to the shop, te guta algo? Translation, I’m going to the shop, do you want anything? Yeah… right? Not so confusing, but more amusing. I learned Spanish the Gibraltarian way and I wouldn’t change it for the world. If I do speak any Spanish today, it is clear to see my Gibraltarian accent.

I made friends; mostly work colleagues, but other ex-repatriates as as well. I found that other ex-pats, native English speakers; really easy to meet and befriend. You’re in the same boat, you enter a very small population of something like 30,000 people, it’s a click that’s pretty hard to penetrate. If you’re considering Living in Gibraltar for a bit, work on your communication skills and be prepared to crack a very tough and tight knit group of people. On the exterior, they’re friendly and distant. Once you get to know them, they are warm-hearted people with a genuine desire to help anyone and potentially, a friend for life.

While Living in Gibraltar, I was working for the Royal Bank of Scotland International as Technology Manager, a fun but sometimes stressful job that involved a lot of translation and exceptional communication skills. When I arrived in London for monthly meetings, I had to translate and summarise Gibraltarian information for the region I managed. Not so easy as it sounds and particularly difficult when you’re relying on information from people who have a very relaxed definition of what urgent means. Urgent could easily be misinterpreted as Manana – meaning, tomorrow.

If you’re going to give Living in Gibraltar a shot, take some books along while you make friends. Here’s a good one I wrote recently while living in Florence. It’s called Monique and this is my plug for it… Adios – Fox.