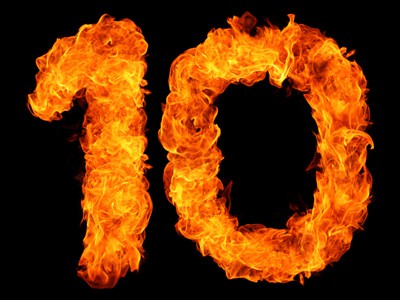 Nostradamus, Edgar Cayce, Jules Verne, Baba Venga are among many who have claimed to predict events in the future.

I’ve decided to add Fox Emerson to that list.

What could happen in November or December that could top off 2020 quite nicely?

Her name might be Sally, or Vjkxzspftrn’s – it’s a bit hard to predict, but if an alien ship mistook an orange-looking, yellow wig-wearing, oversized (and oddly shaped), golf-playing, people irritating muffin for a landing pad somewhere in the region of Washington in the U.S. we might not be as surprised as we would have been in 2019.

Had an alien ship arrived from Alpha-bumfucknowhere-centaury in 2019, we’d all be running amok, screaming in a panic, last minute getting our nails and hair done and generally being your run-of-the-mill panicked humans. Meanwhile, U.S. military (whose nails and hair are always at the ready) would point their guns up, blast away, and ask questions after, while the Chinese are ravaging the ship to determine what’s edible.

But if this ship were to arrive here and now, say…in December 2020, would we even gaf? I think most likely, far more people would throw their arms in the air and ask if there’s any room on their ship (and is there a hair salon on board?).

Forget Guy Fawkes night and fireworks, or Chinese and Indian-level pollution, or Icelandic ash. If a super volcano blows, we are in for a spectacular treat. After the initial kaleidoscope of colours bedazzles us, a thick, grey cloud would blanket nearby cities, and ultimately an ash would cover the Earth, like…super nice and cozy. Yay, we like blankets.

Given the last one was 74,000 years ago, and they should come every 50,000 years, we’re overdue. So, a caldera forming volcanic eruption in December, would fuck us, like Covid’s trying to. But let’s be honest, our sleeves are already rolled up, and our eyebrows couldn’t be raised any further. If a super volcano did erupt, we’d throw up umbrellas and politicians would announce it doesn’t exist and that the ash-covered fruit and vegetables, are delicious and will continue to grow.

As much as I’m heralding the new U.S. Pres, because he affects the entire world, I would not be surprised if super-orange-cheeto-lying-fucknuckle-dictator builds a fort and becomes dictator and ruler for life…which, while we hope is only a few short years, could be longer, as somehow scientists might find a way to implant his brain and personality into a 20 year old, and therefore, he can be King foreveeeeeeeeeeeer.

Elon Musk’s gone a bit nuts. But, he is a fairly bright spark, with some pretty bright sparky ideas, such as terraforming Mars, implanting technology into humans to make us even smarter, because apparently, we’re not smart enough.

There’s been a rumour for quite some time that super-wealthy people have been working on secret space programs to get off this planet. The initial ideas are to live in big ships not too far from Earth, having resources shipped there from Earth, while crops are grown in space, while longer range ships are built, to move further away.

Not quite sure this will happen by 2020’s end, but if we got some actual confirmation of it, I’m not so sure we’d be as shocked as we would have been in 2021.

While I think of it, I’m sure there’s going to be a need for some orange dictator type leader on that ship heading out to space.

A lot of people – myself included, think World War Three already started and we’re in the middle of it. In fact, it’s been suggested that World War Three started before 2016 and Trump is a missile thrown by Russia or China.

It’s also been suggested that Covid-19 is another bomb, but we don’t know for certain who threw it.

Misinformation, disinformation, lies, the very fact that we cannot believe anything, and are equally as ready to believe everything, is proof enough that this could all be true.

December could see an unveiling or thwarting of some plot by some government, in which we discover that this is in fact, all very true. Or untrue and some further validation that this silent war is very much underway.

What the world needs now, is fucking truth. Making lies punishable by death won’t happen by December, but at some point in the future, this author/predictor predicts that there’ll be a war on lies and future generations will be tough on all things untrue.

Would you be surprised to discover that China will be announced the winner of 2020? That somehow, while we were all sleeping, or following the magician’s hands over there, China were quietly gathering power and perfecting their army, ready for God-knows-what, I don’t even want to contemplate?

The only country in the world to have not just recovered financially after Covid-19 decimated the world, but shown GDP growth, is China.

It’s not entirely out of the question that we’ll get some answers before this year is out, but I would not be surprised to discover that Covid-19 was not accidental.

China’s been spying on the west for decades, and the recent banning of TikTok and Hwawei because of the spyware many countries like Australia discovered hidden inside, is further proof that we’ll need to be very careful. We’ve only just realised they’e been watching and planning, but they’ve had decades.

I predict China will become an even bigger problem in the very near future.

It’s no secret and pretty difficult to deny, unless you’re on another planet reading this, that the Earth’s climate is changing. I guess this all depends whether you’re listening to scientists or politicians, because that would determine your knowledge.

There’s a very tough decision being made by governments around the world on our behalf right now; money and society or pollution and the environment.

Unfortunately, reducing or stopping coal production and other planet-warming energy methods appears costly. Reducing pollution or preventing it altogether, is not an option, according to many.

The problem is that warming, and pollution are having disastrous effects on societies and our planet.

Global fires in Australia, the Amazon, the U.S. are just a part of it, but the truth is, the delicate balance – and make no mistake IT IS delicate – is being upset. All that smoke; those fluorocarbons, going into the atmosphere…

Do we need billionaires? What about trillionaires? How about billionaires and trillionaires who influence and manipulate media and politics to create a world we have to live in, that is really better suited for them but doesn’t really do much for the rest?

There’s a growing resentment towards an establishment, and a society that isn’t working.

Covid-19 showed us that money is a problem and our current economies rely on an outdated monetary system. The Great Reset means something different to many people, but essentially, it’s a unified belief that things must change.

Strangely, The Great Reset starting trending in the later months of 2020 on social media, with blogs cropping up here and there, possibly reignited by Klaus Schwab, but possibly because of political and climate events.

Will this happen by 2020’s nefarious end? It’s already happening. That dissent is already apparent, but I predict 2021 is going to force even greater change and we’ll need to prepare for it.

People are fed up and many are yearning for The Great Reset.

Yeah baby. Absolutely nothing else happens. We have a lovely Christmas, a vaccine comes out that doesn’t resemble I Am Legend 2 and we all live happily ever after, skipping off into 2021’s warm, delicious, aromatic sunset.

In 1982, Elliot’s friend – E.T. tried to make a call. We assumed (spoiler alert) that because he was picked up in that intergalactic Uber, that his call had been answered.

But what if his call has only just gone through? We made assumptions that a call to Alpha-bumfucknowhere-centaury, would be answered immediately, and the timely arrival of his craft and friends, was a result of that phone call.

Or was it coincidence?

What if… That call was never answered.

Okay. Now we’re all over the shock of that, let’s investigate the plausibility of this.

If E.T. were to phone Mars from Earth, when we’re at our closest to each other (on the same side of the Sun), then the call could take up to 3 minutes.

However, if Mars and Earth were at their furthest from each other on opposite sides of the Sun, they can be as long as 22 minutes and 22 seconds.
Also, if the Sun was directly between Earth and Mars, the radio signal would have to be satellite relayed around the sun, so add a few more seconds.

If we were to actually make a call to Alpha-bumfucknowhere-centaury, it could take decades. In fact, it could plausibly take 38 years there and back.

E.T.’s call from 1982 might have only just gone through Sally’s switchboard.