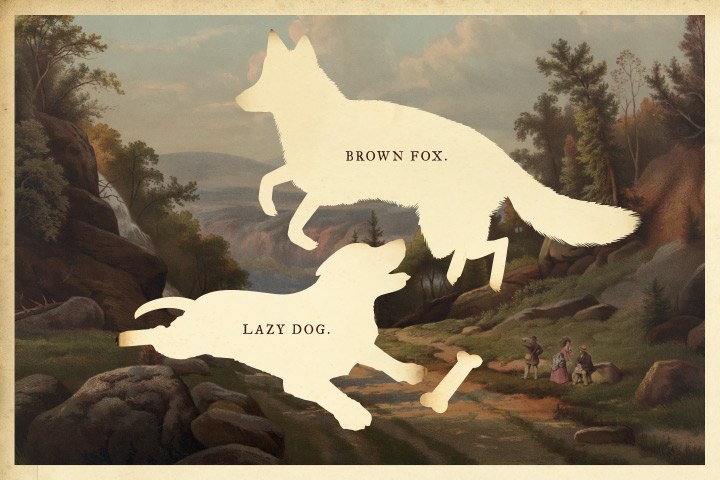 The Quick Brown Fox Jumped Over the Lazy Dog

There are too many holes for this to be true

The Quick Brown Fox Jumped Over the Lazy Dog. But was the dog lazy? Or is this just one point of view? Did the Fox jump? Or was he pushed? And the question I’ve been dying to ask is… was the Fox actually brown? Could the story have been told by a color-blind person?

When I first heard that the Quick Brown Fox Jumped Over the Lazy Dog, I immediately went into defense for the dog. Who the hell are you to call the dog lazy? For all we know the poor dog had been up all night, protecting the family who were asleep inside from intruders and had finally seized an opportunity – in broad daylight – to sneak in a quick nap. It was at that precise moment, the fox who may or may not have been in the act of doing something wrong, jumped over the so-called lazy dog, who had more than likely collapsed from exhaustion.

This dog may have been a rescue dog. He or she may have had a terrible upbringing and gone through absolute hell and had finally found a family that would look after him and is forever labeled as lazy because of a simple, badly timed nap.

But What About the Fox?

What exactly defines quick? The Quick brown fox jumped over the lazy dog – apparently. Have you ever tried to jump slowly? How did that work out for you? Unless you did it on the moon, I doubt you were successful in jumping slowly over anything, let alone a dog. A sleeping one at that. Where was the fox coming from? Perhaps the Fox had been scoping the house all night and had finally seized his moment after the dog collapsed through exhaustion.There is no other way to jump other than quickly so therefore, I propose that the fox – if he was even there – simply jumped.

Who saw the fox? Is the witness reliable? When he said that the quick brown fox jumped over the lazy dog, what was his intention? Is the fox actually brown? Hey may have been more of an orange color, perhaps a grey – similar to a wolf. If we’re going to be looking for a quick brown fox, perhaps we need to ensure that the sighting was accurate. He could have just been a mixed race fox. Here’s a thought, it may not even have been a fox!

Didn’t we always imagine that this alleged sighting took place outdoors? What if it wasn’t outdoors; perhaps it was indoors. It may have been inside a place of business; maybe a bakery. The fox may or may not have been trying to steal a loaf of bread and in an effort to escape, jumped over the allegedly lazy, sleeping dog – which is still in dispute.

What if… this didn’t even occur on Earth? We don’t know the witness, we don’t know the circumanstaces in which the quick brown fox jumped over the lazy dog but we have heard it so many times that we assumed it was true and we also assume that it happened here on Earth. There’s the odd conspiracy here and there about structures on the Moon and Mars. What if this alleged event took place in outer space?

We think that other planets are gaseous and toxic but we don’t actually know for certain. This story may have in fact happened on Uranus.

If I were to boldly state that this story was a complete fabrication, I’d be no better than the person who started off this unverified rumor.

That the dog was not lazy

That the dog may not even have been sleeping. Perhaps he pretended and snapped at the fox in mid-leap? The witness would have been looking at the fox – trying to work out what color it was – and didn’t notice the dog trying to bite the fox’s legs.

The fox was not quick at all, for all we know, he drugged the dog and schemed the whole thing.

The story itself is pointless. Maybe it wasn’t meant to be analyzed. Who knows really? We weren’t there so I guess we will never know.

Thank you to Silhouette Masterpiece for letting me borrow the blog image (very clever image!)