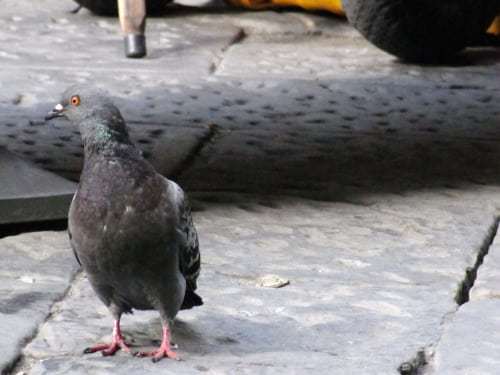 This story I’ve decided to call The Pigeon Drugs n Mafia in Florence started at my local pub on a Wednesday. My mate Pete had just arrived from the UK and was staying with me. So, as a good host, I showed him around to all the good places to drink. This included my favourite pub which I have the ‘occasional’ sneaky pint or two.

Around 6pm, Pete and I decided to sink a couple before we had a nap – yes, life in Florence really can be exhausting – at the local. Two guys sat near us kept coming up and borrowing a lighter. They were clearly pissed and wired and were obviously Italian.

In broken Italian, the first guy asks for a lighter for the fourth time while his mate scolds him for bothering us.
“No it’s ok, here, use it,” says Pete.
“Thanks,” says the Italian guy.
“He has a lot of money, he could just buy his own,” explains the other Italian guy. We joked with them a little and they introduced themselves as Mario and Luigi – I kid you not.

Mario tells us that he was dragged there by Luigi at 10am for a ‘quick’ drink which had apparently lasted 8 hours. I joked to Luigi that I would buy him a lighter because he looked so poor while Mario shook his head and assured me that he wasn’t poor in the slightest. To prove that he wasn’t poor, Luigi raced in and brought both of us a pint. Spur of the moment, I raced into the nearest tobacco shop and brought him a lighter. He was so grateful, they came and joined our table.

Mario and Luigi are best friends from school it turns out and they catch up periodically in Florence. As they continued with what I can only call the ‘Mario and Luigi Comedy Show’, we are entertained by their amusing broken English and stories. Then Luigi tells us that Mario had given him far too much cocaine – indicated by putting his finger against his nose and sniffing – and that he felt a little ‘wasted’. No shit. Evidenced a few seconds later when he swiped his pint off the table. Then disappeared inside to get another one. Then knocked that one over and brought yet another.

When I asked them what they did for a living, they looked at each other and laughed. One began to make up a profession while the other was a little more…um, candid.
“I go around and I pick up money from people,” Mario explained while Luigi tried to tell us he was a doctor. Then said he was a transport driver, then a cook. Mario told us that the cocaine in Italy is the best, “all of Algeria, Russia, every country comes here to get the good stuff! If you go elsewhere, you pay too much, when here, you can buy it for this much.”

I’m impressed but uninterested, though given Pete had just been telling me how much he loves The Sopranos, he was fascinated that we seemed to be in the company of knowledgeable drug dealers. He also tells me he thinks these two must be Mafia.
“How do you figure that?” I ask him.
“Look at them, they are clearly Mafia! Selling drugs, roaming around Italy with no proper job, going around to ‘pick up money’, come on! What else can they be?”
I concede I have no idea and assume he must be right.

Somehow Luigi manages to convince Pete that he should try some of this amazing world class cocaine and gives him instructions to go to the men’s bathroom after him, where he would leave a line for him on the toilet. My friend goes off to the toilet and comes back a few minutes later sniffing his nose and looking remarkeably much more alive. In fact, he begins to suggest we should go to a nightclub. I laugh and suggest he finish his beer first, knowing full well that within half an hour, he would come back to Earth and get back to his normal self.

Mario and Luigi suddenly need to leave to go and ‘pick up some money and do some business’. But they assured us they would be back and if we could wait for them, they would return with presents.

A little while later, Pete is finally back to Earth after a period in which I couldn’t actually have a conversation with him and tells me he’s almost ready to go get some food.

Then suddenly a scooter appears out of nowhere and slams its brakes on outside the pub, near where we were sitting. It turns out it is Mario and he’s halfway through his ‘jobs’.
“Where is Luigi?” we ask him.
“He is a little fucked. He is sitting at home on the couch, he can’t move. His eyes are wild, he looks like a pigeon,” he then tucks his elbows in and puts his hands together, fingers down and pushes his head forward. He bulges his eyes and tries a good impression of a pigeon.
“You know, the pigeon? He looks like this,” and he does it again. We are laughing at this as he then offers us lots of ‘presents’.

We thank him and tell him we are fine and ask him if he would like to join us for a boring beer instead. He tells us that he has to tour some pubs and nightclubs and that if I ever want to find him, he will be situated outside a statue in a square nearby between midnight and 4am. Apparently that’s where I can buy drugs. I thank him for such invaluable information and he revs his scooter and almost knocks over a few tourists as he zigzags his way away from us. Presumably to go and look after his pigeon. His parting words were even more amusing, before he disappeared off to do his business. He’d told us, “don’t worry about me, I have a good lawyer. I pay him 20,000 a year to protect me so I don’t go to jail.”

That’s my amusing Wednesday which I decided to turn into this post, The Pigeon Drugs n Mafia in Florence.

An hour later, as we decided to get a kebab – cos that’s what you do when you’re in Italy – we watched the server – who was clearly brand new, judging by the way he burned someone else’s Pitta bread – get brutally fired by the manager. “Va fan gulo,” he said. I translated this to my friend, he said “Fuck off,” but it literally translates as, go do something in bum.

Another amusing and fun-filled day in Florence.