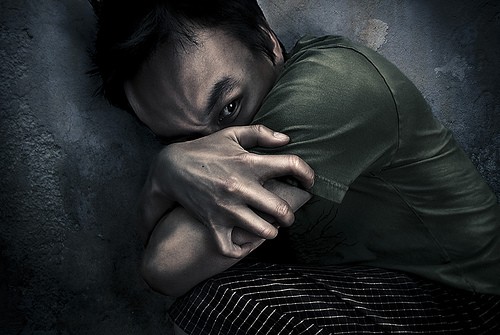 Another victim scrambles for the light switch

At some point during my teen years, I discovered that I would never sleep in a dark room due to continual night terrors that had plagued me since birth. My father bought me an orange night-light, which proceeded to fill my room with an eerie orange glow but managed to keep the dark at bay. Though it did nothing to stop or minimise my night terrors.

Even as a supposed adult, I still struggle to sleep in the dark, with a partner next to me in bed. Last night, yet again, I had another night terror. Because they’ve happened to me since I was a baby, I’ve spent a lifetime researching why they happen and what they could mean.

There’s a few different beliefs of what might be causing these night terrors.

Aliens are performing experiments on you

Don’t laugh. It’s entirely possible that your night terrors are the result of an alien abduction and you’re being experimented on.

Abductees are generally incapable of resisting and are sometimes taken away, but just as often left where they are and paralyzed. There are tests done and sometimes these involve shoving things up your bum or making you pregnant, making me suspect that aliens are all male and half of them are gay.

In the ‘aliens are responsible for your night terror’ scenarios, the examinations are invasive and strike psychological fear into the abductee. Sometimes, the aliens communicate with the abductee telepathically, though they’ve also been said to communicate in your language of choice. Clever little fuckers.

There’s often a loss of time or sense of confusion surrounding the night terrrors that may be controlled by the aliens. What might feel like several minutes by you turns out to be an entire night.

Whether this scenario is likely or not I have no idea, in my own personal instances, I don’t recall aliens or any detail with any clarity, I simply know that someone is in my room and I go into fight or flight mode and am instantly awake.

The Succubus or Incubus demon is trying to fuck you

An Incubus is a male demon that lays on top of women and preys on their fear and uses sexual energy to initially fight their way into your psyche while a Succubus is a female demon who preys on the fear of men. Both wait until the sufferers of night terrors are asleep and in REM sleep before attacking.

In many ancient texts, there are stories of Incubi and Succubi using sex to penetrate their way into a dreamer’s dreams. Though to the dreamer, they do not seem like dreams and quite often, they wake up to the realization that someone is in the room with them.

I’ve personally had one rather scary and disturbing incident in which I woke up with my usual night terrors and discovered someone was next to me. As is usual, I’m too afraid to open my eyes or to try and find out who the hell it is or what it wants, however, one stormy night (it wasn’t, I’m adding that for effect) I felt brave and I opened my mind and said what a close friend had previously suggested, I said, “show me”. Nothing could have prepared me for what happened next. Hands appeared on my body and a heavy weight lay on my body. Then I felt my dick being stroked and I was suddenly aroused. I knew what was happening and I screamed “no!” and began my usual shake, rattle and roll routine to wake myself up. Luckily, my partner heard my screams and turned the light on.

When the light came on, I realized that I hadn’t been asleep and my eyes had been open all along.

Ghosts are trying to communicate with you

Maybe grandma forgot to tell you where she’d buried the thousands she’d never entrusted into a bank, or maybe the previous home owner doesn’t like your new wallpaper – it’s wallpaper, nobody should like it – or maybe it’s a random displaced energy that happend to be skipping along on the ‘other side’ and saw you sleeping and thought, “hey, I’ll go wake them up, they look like a fun place to haunt!”. Whatever the reason, there’s compelling evidence that night terrors are caused by spirits/ghosts/something supernatural.

I’ve had many, many incidents in which I’ve woken up and seen someone watching me from across the room. As an 11-year-old boy I had a very cold hand squeeze mine during one summer night when I couldn’t sleep and my hand circled the wall hunting for cold spots to help cool me down. I’ve had someone knock on my third floor bedroom window – no ladder outside, or any form of access – and I’ve woken up with someone whispering in my ear. One of my worst was waking up with the realization that someone had opened my bedroom door and ran to my bed and launched themselves onto me. I woke up just as I felt someone landing on me. When I tried to sit up and move or scream, I was instantly paralyzed and pushed down.

It is during these horrifying moments at 11pm or 3am or 5am that I’ll shake, and I’ll vigorously move my head and muster all of my energy and try very, very hard to move a muscle – anything, so that I can get up or turn over or just fucking SCREAM.

Maybe it’s all in your mind

There are millions who suffer night terrors, spread throughout the globe and who have no idea what’s happening to them. The last thing we need is some idiot, who has never experienced a night terror, to tell us that it’s all in our minds.

At stupid-o-clock, when alien-demon-poltergeist is screwing with my ass-body-mind, and I’m experiencing sheer terror, I would happily swap with any of these psychologists for a few minutes so I could go back to sleep and not have to suffer anything and be completely impartial and perhaps analyze it all with clinical judgement. But like other night terror sufferers, I don’t have that luxury.

As a young man, watching A Nightmare on Elm street, in which Freddie Krueger came back through dreams into reality and thereby scaring the shit out of his victims – and viewers, like me – I began to realise that night terrors were a lot more common and I wasn’t alone.

When I read a blog or a story or even a book on the subject of night terrors, I always experience kinship with other sufferers and simultaneously dread the next time it happens to me.

Given the frequency in which I have them, I should be fine for a couple of weeks.

Thanks to Smart Living for letting me ‘borrow’ the featured image.

You might want to check out my upcoming book, Circle in the Sand, about aliens, Gods and the afterlife out on 1st Oct and available for preorder.