I hit both the front and rear brakes at the same time and skid to a halt beside the flaming red Ducati.

The guy riding it is wearing a tight blue outfit and a smokey gray helmet complete with tinted visor so I can’t see his face. It doesn’t matter, I’d have sex with him anyway. He wouldn’t even need to undress, I’d prefer it if he didn’t. We could do it right now, on the road, at these traffic lights.

The lights turn green and Mr Ducati speeds off. I pull the throttle back on my black Honda and go for the chase. I’ve already missed my exit off the highway, now intending to follow this guy no matter where he rides to.

Yes I’m a stalker or maybe just a sucker for a guy on a hot bike. I was positive he’d given me the eye earlier. Even if I couldn’t see his eyes, you can tell these things. The subtle nod of the head, the rider’s helmet slowly scanning you and your bike. He was clearly interested.

My speedometer read 145 km/h as I maintained a 5 meter clearance from Mr Ducati. Another set of lights and I pull up next to him.
This time, he lifts his visor and I get a look at flame filled blue eyes that penetrate me for the first time. I’m falling in love. I can’t really see his mouth, but I can tell he’s smiling so I lift my visor and stare back. Electricity flows between us. He wants me just as bad, I can tell.
The lights turn green again and this time, I take off first. On to the next lights as I indicate right. My heart double beats as he does too.
We turn off. His skin tight kit glistens in the sun and leave my imagination running wild with thoughts of the body underneath.
We enter a residential neighbourhood and I watch Mr Ducati lean the bike as he rounds a bend. I’m impressed, his knee almost touches the ground.
I’m seconds behind him as I round the same bend, lowering the bike for what I hope is an equally impressive turn. 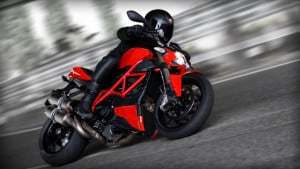 My knee touches the ground and I begin to wobble. Unsteady. Right the bike too late. Kerb looms. Green bins appear. Crash. Rubbish everywhere and me amongst it. Under it.
I can’t see too much as there’s slime on my visor. I’m not physically hurt and I am aware of how I must look now.
I’m on someone’s lawn, amongst a number of green bins, covered in their contents, I’m destroyed. Please don’t come back Mr Ducati.

But he does. I’m looking up at the sunlight which he now blocks and his hand reaches for mine as he tries to lift me up.
Something slippery takes my footing and I can’t get up. Instead, I pull him down on top of me. Another bin knocks over and lands on him. More household waste pours over him and drips on to me.
I can hear him laughing. I realise how funny this really is and begin to laugh with him.
Not quite what I’d hoped for earlier when I’d fantasised about him in his riding gear on top of me but I allow myself to enjoy the feel of his hard body laying on top of me, trying to ignore the stench from the rubbish around us.
He doesn’t move for a minute then slowly gets up. Attempts to lift me up again, this time with success. We survey the damage to my bike and my gear and thankfully discover there is none.
We pick up what rubbish we can and put them back in the bins. My bike is fine, not even a scratch thanks to the lawn.
He lives locally apparently and I can use his shower, I say yes before he finishes his sentence.
I start my bike without a problem and follow him to his house.
We pretty much strip to underpants in his garage and I assess Mr Ducati for the first time. I was right. He is hotter than his bike. He shows me to his shower and gives me a towel. I can’t resist, I suggest we shower together. He laughs uncomfortably and says he will wash our riding gear instead.
I shower first and come out wrapped in a towel and can’t resist getting a good look as Mr Ducati walks off to have his shower. I hang our riding gear up to dry while I wait for him to join me.
We enjoy a coffee together, both wrapped in towels and compare our riding experiences.
I realise we’ve met before. Once at a gay bar. He tells me he’s recently single and not looking for anything, but there’s always an opening for a riding buddy.
I hope he doesn’t mean on bikes, but it turns out he does. Though he hints there could be more… If I’m patient.
Given that I’ve gone 30 kilometers past my home just to follow this handsome stranger, I reason I’m willing to wait around for a bit longer.