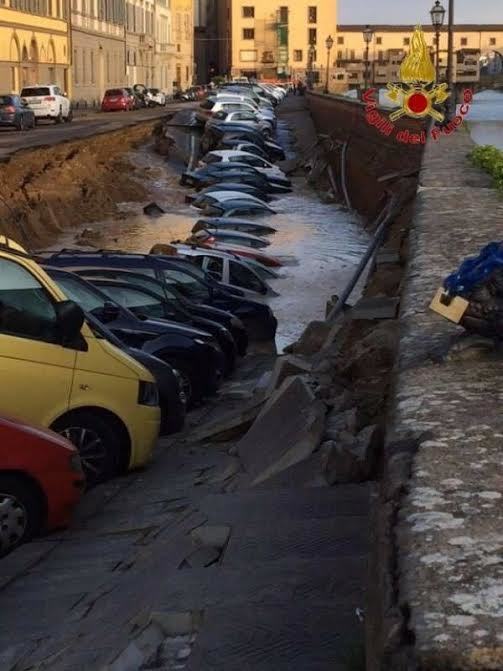 Nothing heralds the end of times more than waking up to no gas and no water. Yes, that’s right folks, if you’re in Florence – Italy today, nobody had water this morning and a lot of people – myself included – had no gas. It felt like the start of an apocalypse today.

So waking up at stupid-o’clock to make a coffee and alas… no gas. So I went out, three flights of stairs and across the street and got a delish cappucino. Then came back, took a shower – without water – and was a litle confused that I came out dry. So hence, i went to the gym. An hour and 10 minutes later and took a shower there as apparently, the water’s back on. So perhaps there won’t be an apocalypse today.

Lately I’ve been thinking about the apocalypse – maybe not an apocalypse today – but in general. Especially when you wake up to a picture like this one that was taken a few minutes before I woke up. Ever seen a zombie flick/series? Picture something like The Walking Dead. The zombies are walking slowly when no delicious live people are swanning around. That’s me, I’m getting up, I’m slowing – arms forward – making my way to the coffee machine. I get to the coffee machine and turn on the gas. Now let’s cut back to the zombie when he/she sees a live delicious-smelling human. The zombie suddenly rushes them and starts ripping their throat out. That is me when the gas didn’t work. I’m trying to rip the fucking gas faucet’s throat out.

Then, to make matters worse – no effing water. HOLY SHIT. Talk about the apocalypse.

So, right now, I’m in the middle of writing Mr 303 Part Two. Without giving away any spoilers, I’m working the characters without water, some of them without much food and definitely no gas or electric in some places. You can imagine how I felt this morning in the 21st century, without these essential items.

I was a little spooked.

I want YOU – yes you, not the fly on your shoulder – to have a think about this. Imageine yourself without water or gas or electricity for a week. Imagine that your neighbours don’t have it either. Without any of those things, your supermarket won’t open because, chances are; no electricity to open the doors, security, cash registers, lights etc. So you can’t go stock up. Without electricity, not much is going to move around so you’re supermarket isn’t even going to get stocked up. Suddenly, in just 48 hours, you would have a very real feel for an apocalyptic or dystopian event.

I’ve given you a taste of what Preppers think about, what they prepare for, what they suspect is going to happen when the SHTF (Shit Hits The Fan).

And no, in all honesty, I don’t think they’re nut jobs.

In fact, most of them are hard-working people who just happen to have put two and two together. They know that our global financial crisis isn’t going to fix itself soon. They know that if the economy doesn’t collapse, there’s about 10 other things that are threatening to fuck us up. Terrorists could easisly – and to be honest, I’m surprised none have so far done this – drop an EMP on a big city. An Electromagnetic Pulse would destroy electrics within so many miles/kms and fuck shit up for good. Imagine that in the centre of London or New York or Rome or Tokyo or Dubai right now. Talk about an apocalypse today, it would be over in seconds. The outcome of that, would be horrific.

If that doesn’t happen, we are well and truly overdue for a super-virus. We are seeing a worryingly growing number of resistant forms of bacteria and viruses. We call them Superbugs. Google it if you don’t believe me. Type in Superbugs. The WHO themselves issued a statement in the last couple years stating they are worried about the potential outcome of such viruses which we do not have anti-virals to treat with. Holy fuck. Seriously, you could die from a simple operation for an ingrown toe nail for example.

Or, Scientists fear that we are also at risk of a Solar Flare from the sun. That would destroy our atmosphere and we would all be crispy toast. Except not as delicious. This is less likely than an EMP or a virus, but still a big fear.

Then there’s the simple fact that we are doing things to this planet which might not be such a smart move. A bit like when you go to the beach and lay there under that beautiful sun and feel those tingles as the sun heats you up and you forget that you didn’t put sunscreen on but think, oh fuck it. We’ve all been there. Except this isn’t about sunscreen, this is about not considering the outcome to our actions. We get off that beach and we have ourselves to blame for the sunburn which makes it impossible to shower for a couple of days. We will have ourselves to blame when all the bees are completely gone – yes, they are dwindling by the second – and our essential food producing plants can’t pollinate. If you’re smart like China, you might start pollinating by hand.

We ignore this, because it’s not directly affecting us. Though let me give you a tip, this is a really good time to stock up on honey. One day very soon, you wont’ be able to afford it. It might even be in history books alongside dinosaurs with a label that says, “Your grand-parents used to eat honey. But then they killed all the bees.”

Super – fucking – volcanoes scare the shit out of me. If a super – volcano went off, forget it. It’s seriously the end of the world. It is highly unlikely the human race would rebuild within a few hundred years if that were to happen. The gas clouds would block out the sun for a long time, killing most vegetation and plummeting temperatures worldwide. EW.

So, on a happier note. My gas is back on and my water is running fine again. So for today, I can stop being a dramatic ass-hole and go and do something productive and not worry about an apocalypse today. It’s sunny and fine and maybe I’ll go get some honey while it’s still cheap.

Cheers for tuning in!