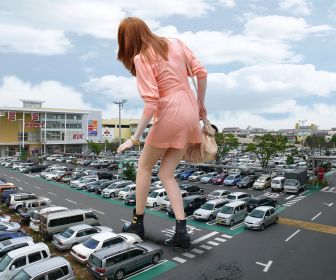 Liesel had a hangover, but still she made it to work, even if the bags under her eyes were big enough for a grocery shop and the bottom of her mouth tasted only marginally like the bottom of a birdcage. Either way, she had no idea that this particular Friday, she was going to enter Cougar Town.

At 10am, while the office scrabbled with the idea that the weekend was a mere few hours away, Liesel had a ‘client meeting’, which meant she was going to go to the shopping center and find a good juice and perhaps a snack that would contain enough grease that would appease the throbbing headache for just a few minutes.

She walked out into the parking lot, a 45 year old woman who still had the body of a 30 year old and tits to die for, and shielded her eyes from the blinding sun.

“Hello, nice day huh?” The stranger’s voice appeared to come from the heavens. She looked up and squinted into the bright sunshine.

She looked down, then to her left. A young man – perhaps in his mid twenties – who she’d briefly glimpsed when she’d first walked out, was looking directly at her. The source of the masculine and friendly voice.

“Hi, how are you doing?” she responded with some trepidation, while sub-consciously patting her purse and checking that her valuables were secure within her clutches.

“I’m great, how about you?” he said. His smile widened – as though he understood that she wasn’t herself at that moment – then moved away from the pole he’d been leaning against. She took him in and was surprised by how bulky his arms were and as she cast her eyes down, she also realised how fit he rest of his body was. His perfectly formed features basked in the sun’s ray as his aquamarine-eyes sparkled mischieviously. Those light-red lips were full and begged to be discovered.

“Well, at 2 o’clock this morning, as I was wondering whether my friend and I should open up a third bottle of red wine, I was feeling fantastic. Now? Not so much!”

His laugh was genuine as he casually leaned against the pole again. His body language was casual but his meaning was unmistakable. Even as he said, “well, I can’t imagine how fantastic you looked last night if this is how you look with a hangover.”

The redness that she felt in her cheeks was nothing compared to the stirring she felt between her legs. It wasn’t the way he looked at her that suddenly threw pictures of a wild bedroom workout into her mind, but more the way he suggestively looked her over, as though she was something that needed to be consumed and quickly.

Before she had a chance to think of something to respond with, he added, “you’re absolutely stunning. I don’t mean to make you feel uncomfortable. You’re out of my league and I’m pitching high – I know, but you must surely have this happen all the time.”

Liesel’s eyes plummeted to the pavement, then slowly made her way up his body; savouring the way his bulge looked promising and the way his t-shirt hid nothing. This package came with an expiry date and she knew it. It needed to be consumed immediately – even as she wondered whether the conversation was leading to where she suspected it was.

“Not as often as I’d like, and to be honest, not usually by the type of guys that I go for anyway. You know how it is, the ones you think are hot, don’t reciprocate.”

“And which category do I fall under?” he asked with a wry smile.

Barely a moment passed before she almost whispered back confidently, “you’re in a category of your own,” and for the first time, she added her own sly smile. Game on.

“Where are you headed now?”

“To a meeting,” she lied – suddenly realising his intentions were as she’d thought.

“I live nearby…” he stopped and waited, the invitation now palpable.

“Oh, um…” casting her eyes right, then left, then back at him, she smiled apologetically and slowly began to back towards her car. The disappointment on his face was obvious as she said, “but I’m sure the next customer who comes out might have more time,” and moved towards her car. He slowly followed her, but within seconds, she realised he was heading to his own car – which coincidentally was parked near her own.

“It was nice chatting to you, I hope you have a great day,” he waved and moved towards his car. Her phone rang. “Hello?”

“Hey Liesel, I’m so sorry I couldn’t call you back earlier. Can we change our meeting to next week? I’m running so late and I won’t be free until then.”

As she politely told the caller that it would be ok, deep down she felt disappointment. They’d started with dating and now he was calling their scheduled coffee, ‘a meeting’. Didn’t he have weekends? Why next week?

She put the phone in her pocket and tried to suppress her building anger. Then she looked over at the handsome man as he sat in his car and seemed to be fiddling with controls and felt adrenaline take over. She marched over and leaned into the car, and with her face a mere inches from his, she asked him, “you said you live nearby didn’t you?”

His surprise couldn’t mask his immediate hard-on, which she noticed immediately. “Yeah, literally down the road.”

Whatever he’d been doing, it was cast aside in a hurry as he started his engine, put his seatbelt on and looked back at her. She walked to her car, got in and started the engine, then sat and watched him. He slowly drove off, as though expecting her to veer off and laugh; perhaps a joke that she would tell her girlfriends about later.

She didn’t; she followed him.

He’d been right, it was literally down the street and as she pulled into the driveway behind him, he got out and seemed a lot younger than how he’d started. Not as confident now, are we buddy? She thought to herself, but smiled at how handsome and marvelled at how young and keen he was.

She stepped out of the car and entered Cougar Town; her first day on the job.