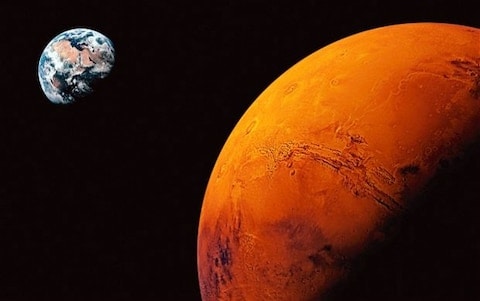 The Chances of Anything Coming from Mars

The Chances of Anything Coming from Mars…or going there, for that matter…aren’t that slim anymore.

It’s deeply ingrained in us to be unhappy with what we have. We’ll either look at what we have and try and improve it – even while marvelling at how wonderful it is – then tweak it and perfect it and refine it. We’ll visit one of the most spectacular places on Earth, wallow in its beauty, bathe in its natural goodness while languishing in its unique ability to recharge us when we need it most then look elsewhere the next time we seek that recharge.

We have a tendency to not be happy enough with our lot.

We have an abundance of water, sun, resources, life and opportunity on Earth, yet we’re talking about moving to Mars – a barren and inhospitable planet that really doesn’t look all that much fun. Scientists are mapping the terrain, analysing the atmospheric conditions and calculating what it would take to turn Mars into Earth 2.

That chances of anything coming from mars will be high and it might turn out to be humans, coming back on holiday. After all, it’s going to take thousands of years to terraform Mars then humans will highly likely still return to Earth for some fun in the sun. Laying on a rock in your spacesuit is going to get boring very quickly when the maximum temperature is 12 degrees Celsius.

There’s a hypothesis that we’ve already lived on mars and we left because the planet became unstable. Far too many conspiracy theorists have questionable evidence that there’s artefacts on mars and enough scientists to be noticeable, conclude that it’s entirely possible that somewhere in our past, Mars had breathable, non-toxic air.

The case for mars

How did we leave mars? In Circle in the Sand – a fictional story in which a God returns to earth to rescue select humans and to give them a tour of the Universe, we gain insight into one such conspiracy theory that talks about Martian settlers having made earth home. The Gods moved their people from mars and rehomed them on earth. Circle in the Sand presents the history we know as a lie.

Even on this planet, there’s incredible evidence from thousands and thousands of years ago that we cannot explain and does not fit into the time period of that era. There are entire websites dedicated to Out of Place Artefacts – grab a drink and let yourself go on a Google spree and fall down the rabbit hole. I feel like I’m offering you a blue pill and a red pill moment – which is more like the back button and the click for more information here button.

The chances of anything coming from mars are high, and we’re not talking about the countless particles that are flung into space every time a meteor hits the planet’s surface either. In the coming years – like 5 or 10 – people like Elon Musk are going to make travel to and from mars a reality, especially since the breakthrough of reusable rockets being able to successfully land has meant enormous saving of funds.

If you aren’t already stargazing, wide-eyed at the skies above us, then you should be. The future’s about to make Star Trek look inaccurate and boring and Stargate prophetic.

Grab a copy of Circle in the Sand let me know what you think.